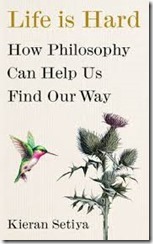 Does philosophy have anything to tell us about problems we face in everyday life? Many ancient philosophers thought so. To them, philosophy was not merely an academic discipline but a way of life that provided distinctive reasons and motivations for living well. Some contemporary philosophers have been inspired by these ancient sources giving new life to this question about philosophy’s practical import.

The problem with the contemporary discussion about philosophy as a way of life is that answers to questions about how to live are too often drawn directly from these ancient sources. Aristotle, the Stoics, or Epicurus are treated as sages bestowing wisdom on us blinkered moderns. While there is no doubt great wisdom in this ancient literature, one might question the relevance of their commentary. We live in vastly different circumstances confronting problems of which they never dreamed. Furthermore, there has been a flood of philosophical water flowing under the bridge during the past 2000 years. Is that just so much effluent to be drawn off while we contemplate the Stoic logos or Plato’s forms?

This literature needs input from contemporary philosophers who can apply their considerable analytic skills to problems in living as they emerge in modern society without being freighted with ancient ideologies. Hence the import of Kieran Setiya’s new book, Life is Hard: How Philosophy Can Help Us Find Our Way. It is a paradigm of what is needed in current discussions about philosophy as way of life.

Setiya’s credentials are impeccable. A professor of philosophy at MIT, co-editor of a respected journal Philosophers’ Imprint, and well known for his work in ethics and practical reason, Setiya suffered a midlife crisis in which he began to question the value of academic philosophy. The result was his 2018 book Midlife: A Philosophical Guide.

His new book is also intensely personal although Setiya melds his life experience with ancient and modern philosophical sources, literature, history, and the social sciences in order to think his way through obstacles to us living good lives. As someone who suffers from chronic pain, he gives us a front row seat to how he thinks about problems of living.

Of course, philosophy has always claimed the mantle of providing guidance in how to live. But as Setiya points out, this has almost always taken the form of ideal theory. From Aristotle’s vision of a life without deficiency or human need to Rawls’ vision of perfect justice, philosophy too often abstracts from the messy details of ordinary life to imagine what a perfected human nature might look like. As a result, it is often not helpful.

By contrast, Setiya focuses on problems we less-than-ideal human beings confront. The question is not how we can live lives as close to an ideal life as possible. It is instead about how we can live satisfying lives despite coping with chronic pain, loneliness, grief, failure, injustice, the loss of meaning, and empty platitudes about hope. There are chapters on each of these topics. There is nothing ideal about any of this. Living well is a matter of doing what we can under difficult circumstances.

Setiya’s discussion is both erudite and accessible and often surprising. In addition to philosophical expertise, the author has done his homework in the social sciences, and he pulls from diverse literary sources as well to sharpen our perceptions of human experience. He provides philosophical arguments, but their purpose is to clarify our thinking about a topic and unearth unwarranted assumptions rather than develop a theory. The audience for the book is any human with an interest in pulling on philosophical threads about ordinary life to see what they reveal. An acquaintance with philosophy is helpful but not required.

So how does philosophy—that abstract discipline that seems so remote from ordinary experience—contribute to advice on how to live? The persistent theme of each chapter is that when we struggle to cope with life’s difficulties, it’s often because we make conceptual mistakes that philosophy can help to identify and correct. Here are a few examples:

This debunking of commonly held but false beliefs leads to some helpful advice about coping with life’s difficulties. Treat chronic pain as a series of isolated episodes to avoid the way such pain shuts down our access to the future. Cope with loneliness by helping others; cope with grief by engaging in the social rituals one’s culture makes available for such occasions; find value in the present and the countless small activities that make life meaningful; and deal with injustice by finding groups to join that can engage in successful collective action.

This is all good advice but not particularly surprising or original. Many people discover these strategies for coping without wading through the metaphysical stylings of Aristotle or the musings of a contemporary philosopher of ethics. There is much more to this book than a set of instructions for living well. Setiya identifies his book with the tradition of “self-help” books but rightfully qualifies that connection.

I said before that moral philosophy and self-help had long been intertwined. This book owes something to that history. Reflecting on the flaws of the human condition can mitigate its harms, helping us to live more meaningful lives. But this is not a self-help book if that suggests “five tips for overcoming grief” or “how to succeed without even trying.”

Self-help books tend to tell us what to do about life’s difficulties. They want us to change our behavior. By contrast, Setiya focuses on how to think about life’s difficulties even when we can’t do much about them. He identifies his aim with the notion of philosophy as consolation. But I’m not sure this is an apt description. There is very little we can do about chronic pain, grief, or injustice, and Setiya doesn’t suggest there is some hidden consolation that lessens their impact on our lives. However, there is a great deal of re-thinking that will help us overcome loneliness, the sense of one’s life as a failure, and the loss of meaning, none of which involve making us feel better about them.

Thus, lists of action items or paeans to “it’s not as bad as we think” are not what this book is about. The book is instead about how to think, how to make sense of our own experience without platitudes or illusions. It’s not the product but the process that matters.

In everyday life we rely on generalizations that facilitate action. Generalizations enable us to perform activities across different contexts, at different times, and with different people. But they continually get us into trouble. When we look at the granular details of our own experience, sometimes with the help of literature or psychology, we see the facts have a residue that doesn’t quite fit the generalizations. Thus, Setiya begins every chapter by debunking some commonly accepted canard that everyone seems to think is true but which is unsupported when we look more closely. Such skepticism toward conventional wisdom is essential to philosophy and getting us out of these conceptual ruts is essential to solving problems in living as well.

However, many of the ideas he is most skeptical about come from philosophy itself. He persistently reaches into the history of philosophy to pull out flawed analyses of concepts relevant to the topics under discussion. What function do these philosophical excursions serve? As Setiya repeatedly points out, it’s often quite useful to find out where an analysis goes wrong. But this is more than noting mistakes that we don’t want to repeat. Wrong turns in philosophy are seldom wholly mistaken, at least not the ones that have survived that we still study today. Usually, there is some insight there that must be viewed from a different angle.

Consider for instance Setiya’s discussion of friendship (which includes romantic and family relationships as well.) The issue of friendship arises in the chapter on loneliness. People who suffer from loneliness lack the affirmation of their human dignity that genuine friendship offers. Setiya uses Aristotle’s concept of friendship as a foil. Aristotle thought that friendship was based on admiration of the friend’s superior moral character. Setiya doesn’t think much of this idea.

“Friendship may be hard, but not in the way that Aristotle thinks. We can be friends without being heroes or statesmen performing noble deeds. When I picture friends, I think of people having drinks together, laughing at each other’s jokes, grieving, sharing stories, watching movies, playing games, cooking food. Some of these friends are what I would call “virtuous” or admirable; others not so much.”

But if Aristotle was so wrong-headed why mention him at all? The answer is that Aristotle wasn’t entirely wrong. Although Setiya is right that friendships often don’t involve the mutual admiration of virtuous character, such admiration is surely the basis of some friendships. Aristotle was generalizing where he ought to have been looking for differences. Setiya is right that friendships are about the affirmation of human dignity but what that means will differ from friend to friend. He implicitly recognizes this when he points out that what we care about is not friendship in general but the particular friend whose affirmation we seek. Thus, when he recommends to the lonely that they reach out to others with compassion hoping to receive affirmation in return, much depends on whether such reaching out is tuned in to the real needs of the other person and what human dignity means to them. We should view competing views of friendship in the history of philosophy not as attempts to generalize about friendship but as alternative ways of being a friend.

Therein lies the value of philosophy for everyday life. Philosophy provides competing, elaborately worked out alternatives that indicate potential ways of being a friend and thus dealing with loneliness, or potential ways of coping with pain, grief, failure, injustice, loss of meaning or the disappointments that hope enables. When shorn of its theoretical garb, philosophy offers suggestions for experiments in living.

Of course, literature and the arts, history, and the social sciences also offer potential experiments in living. But it is philosophy’s job to show how the granular details of life must continuously re-shape our concepts to avoid those aforementioned conceptual ruts. Practical philosophy is conceptual analysis from the bottom up or what Setiya calls “close reading.”

This is why Life is Hard is such an important intervention in debates about philosophy’s import. If philosophy is a way of life, it is not because it supplies answers to our problems but because it asks questions that enable us to see alternatives. Pace the Epicureans or Stoics, philosophy is not about honoring the sage or meditating on their platitudes. It is about how to think.

I found much in this book to disagree with. (It is after all a work of philosophy.) For instance, in the chapter on the absurd he tackles the question of whether life as a whole has meaning. He concludes:

“If there is meaning to be found, we must find it in the shape of history, the arc of the moral universe that bends, or does not bend, toward justice.”

But elsewhere he praises the “countless little thoughts and deeds” that make live worth living for individuals. I wholeheartedly agree on the value of what he calls “atelic activities.”

Such quibbles aside, this is an important book not only for the thoughtful, accessible analyses of some of life’s most intractable problems but for what it represents in philosophy—a marriage of analytic skill and humane sensitivity toward ordinary life.